Coder on Why They Chose the Open VSX Registry

This is a guest post by Coder. Authored by Joe Previte (@jsjoeio), Open Source TypeScript Engineer at Coder.

Near the end of 2021, the code-server Team at Coder made the switch from a custom extension marketplace to the Open VSX Registry. 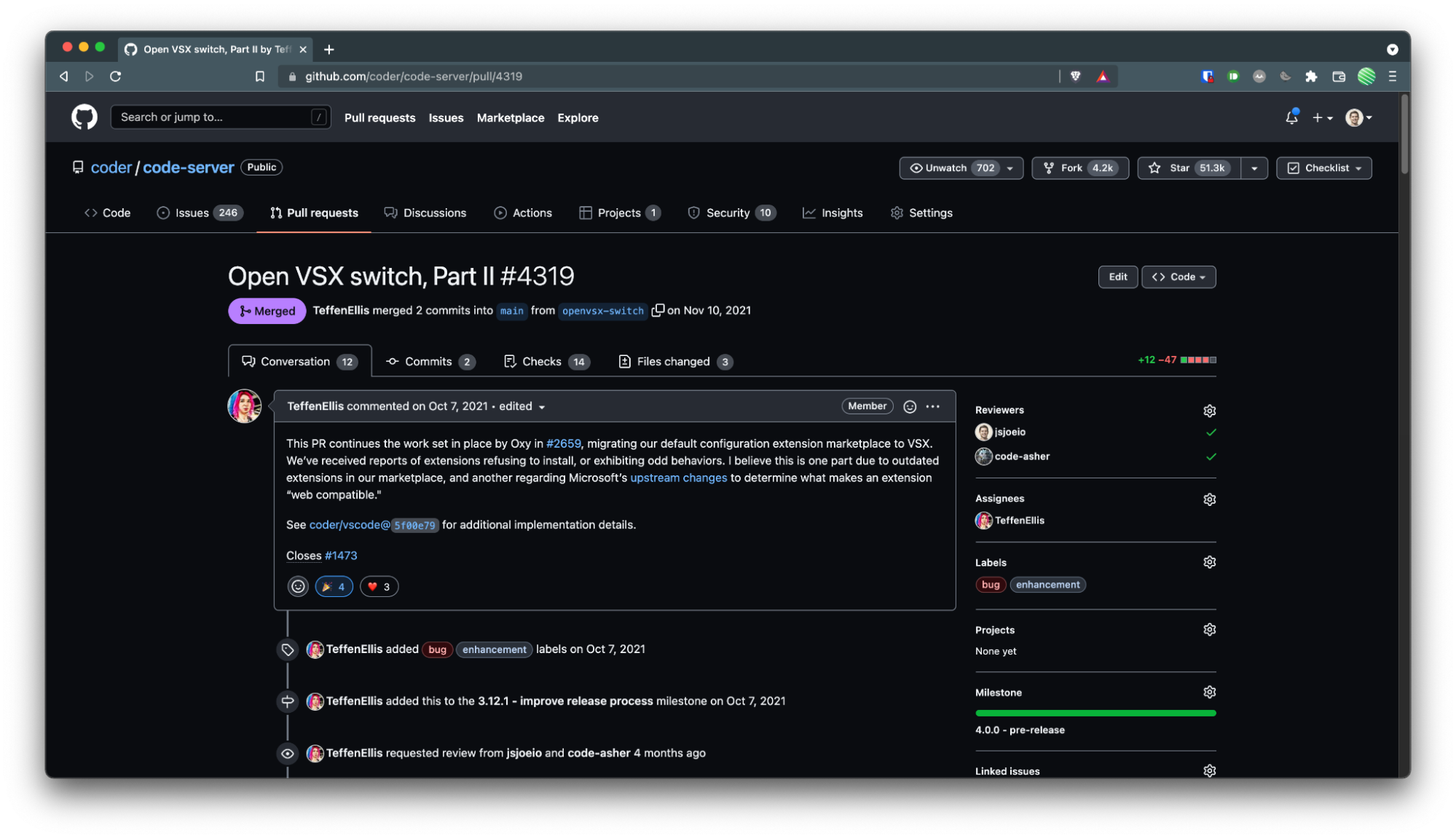 If you haven’t heard, Coder’s on mission to keep developers in flow wherever they go. How? By taking your developer workstation and moving it to the cloud.

Inside your cloud-based workstation, you have access to code-server, VS Code in the browser. Let's talk about embracing Open VSX.

We decided to embrace Open VSX as our primary extension marketplace for two reasons:

When code-server first launched, the team created our own extension marketplace. This was around 4 years ago before Open VSX was popular.Since then, the custom marketplace become more and more difficult to maintain. Things break. Extensions go out of date quickly. The team was reduced in size. Open VSX became more ubiquitous as the optimal extension marketplace solution for VS Code-like editors. That reason alone convinced us to switch.

The second reason was that the Open VSX Registry is an open-source registry and operated by  a foundation. This alone shows that it’s not a proprietary product with ulterior motives. It truly serves the community. We wanted to embrace that because it aligns with code-server’s values of putting the community first.

As a result, we embraced Open VSX in November 2021 and it vastly improved the UX of code-server as an IDE.

Our Experience Integrating with Open VSX

Switching to Open VSX was a fairly easy task. It was mostly a matter of switching environment variables. The reason we didn’t do it sooner was because of a minor issue around web extensions.

When GitHub released Codespaces, VS Code introduced a concept called "web extensions". They’re the same as regular extensions, except they run in the browser and don’t have access to Node.js APIs. Open VSX didn’t support these right away. Or rather, they didn’t provide all the necessary information.

After that was fixed and code-server was in a good place to switch over, we did so! It’s only been 3 months since we’ve made the switch but overall, the response from the community has been positive!

What We Hope to See Moving Forward

We hope to see the Eclipse Foundation continue building tools that help extension authors publish to both the Microsoft Extension Marketplace and Open VSX. Oftentimes extensions are in one marketplace but not the other. This causes confusion in the community for products like code-server. With more tools to help authors publish to both, it would be a win-win for everyone.

We are also excited by the fact that users can self-host Open VSX registries to support extensions in restrictive and air gapped networks. We hope to work with Eclipse Foundation to add new authentication and deployment options to make this available to more of our users.

Other than that, we hope the Foundation continues supporting this project for years to come. It’s hard to imagine the IDE/editor space without something like Open VSX.

Both the Coder and the code-server team are very appreciative of the Eclipse Foundation and the project team that maintains Open VSX! It makes the UX of code-server 10x better and reduces the burden of maintaining our own extension marketplace.

You can read more about Coder on our website or check out code-server’s GitHub page for more information. Feel free to pop in the Discussions and say hello!