The ease with which software can be copied and combined makes it challenging to know with confidence if content can be used without running into legal issues. Any sort of serious software development effort must be accompanied by a well-defined IP Due Diligence process that can ferret out issues and mitigate the risk of leveraging the work of others. IP Due Diligence is a time consuming process that requires specialized skills and a keen eye for detail.

There are different kinds of content (source code, documentation, images, …) to consider. Project Code is content that is produced and maintained by the open source project committers and contributors. Third Party Content generally takes the form of libraries (modules, components, …), source files, images, or other forms of IP that are produced and maintained outside of the scope of the open source project. To mitigate the risk associated with adopting open source in products, the Project Code and Third Party Content that it leverages need to be vetted to ensure that the copyrights expressed are correct, licensing is valid and compatible, and other issues have been uncovered and properly investigated.

The Eclipse Foundation has a well-defined IP Policy, corresponding IP Due Diligence Process, and a dedicated team of professional IP specialists who perform the heavy lifting in the due diligence process. Committers, the software developers who decide what will become Project Code and how an Eclipse open source project will leverage Third Party Content, are responsible for bringing IP issues to the attention of the Eclipse IP Team.

Most of the Project Code produced by committers can just be pushed into a project repository without any sort of legal review. However, at least in some cases, the IP Team needs to be engaged to review Project Code that comes from contributors (who are not committers); and there are some cases where even the work of committers needs to be reviewed. I’ll discuss Project Code with more detail in a future post.

The sort of effort that the Eclipse IP Team brings to bear on Third Party Content varies depending on the type. The Guidelines for the Review of Third Party Dependencies defines three different types: Prerequisite, Exempt Prerequisite, and Works With Dependency. 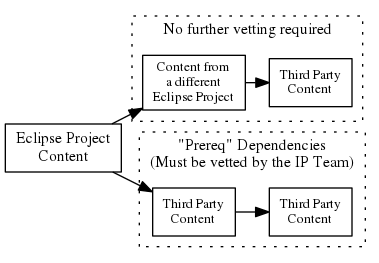 The Eclipse IP process guidelines provide for a notion of Exempt Prerequisite dependencies, which are not subject to review. According to the guide, content may be considered exempt if it “is pervasive in nature, expected to be already on the user’s machine, and/or an IP review would be either impossible, impractical, or inadvisable.” The Eclipse IP Team does not review the source code associated with an Exempt Prerequisite.

One of the key aspects of an Exempt Prerequisite is that the user or adopter is typically the one that actually installs the software and so is the one who must agree to the licensing terms. Content that is declared an Exempt Prerequisite should never be directly distributed by an Eclipse project or otherwise made available without some explicit action from the consumer. Exempt Prerequisites must be approved by the Eclipse Foundation’s Executive Director.

It’s enough to just register the use of Works With Dependency without seeking IP Team approval for its dependencies. The consumer is responsible for making that content available and otherwise agreeing to the terms for that content.

As with an Exempt Prerequisite, a Works With Dependency should never be directly distributed or otherwise made available without some explicit action from the consumer. Works With Dependencies must be approved by the Eclipse project’s Project Management Committee.

Eclipse committers engage the Eclipse IP Process is by filing a Contribution Questionnaire (which is commonly referred to as a CQ). Committers can find a link to create a CQ on their project page in the Eclipse Project Management Infrastructure (PMI).

As always, if you’re just not sure… ask. We’re here to help.